Next up were local favorites, Soft Lions, playing their engaging blend of indie, surf, garage, and girl-group sounds.  I’ve seen Soft Lions a half-dozen times now, including their debut performance on the same stage back in 2014, and they always put on a great show.  This night was a surprise as I only discovered the day before that they would be opening for Sharkmuffin, who are on a national tour.

If I had a complaint about this band it’s that their sets are too short!!  Hopefully that will be solved soon as I spoke with the keyboardist, Ana Ramundo, who told me that the band will be heading up to the Bay Area soon to record more songs.

Soft Lions plays all over town, as headliners and in support of other local and touring bands.  Check them out soon!! 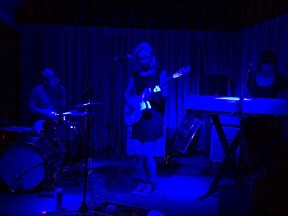 Here’s “Earth Energy” from this show.