I’m sure there are a lot of great local music scenes spread throughout the country with talented, creative and ambitious musicians playing in bands to crowds large and small. But there seems to be something special going on in San Diego right now as the number of worthwhile bands that can be found across stages throughout our county is truly impressive.  On almost any particular night there is a group worth checking out somewhere: from the Soda Bar in North Park to the Casbah in Little Italy to the Pour House in Oceanside.
This was never more apparent than at the Music Box on April 1st when the Redwoods Revue II took over the swanky downtown venue.  On this night Al Howard and the gang at Redwoods Music put on a show with five acts from their roster: Cardinal Moon, Dani Bell & the Tarantist, Birdy Bardot, The Midnight Pine and Rebecca Jade & the Cold Fact.  I’ve seen a lot of local bands at a bunch of different venues but I’d always wondered what they would look and sound like on a bigger stage with a superior sound system and top-notch lighting.  Now I know.  They look and sound awesome! 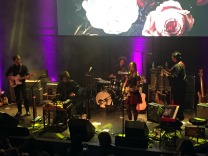 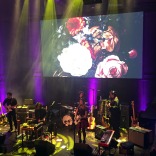 First up was the debut performance of Cardinal Moon, which is a new musical partnership between Al Howard and singer/songwriter Dawn Mitschele.  As Cardinal Moon, Dawn focused on the vocal melodies and the music while Al provided the lyrics. I spoke with Dawn after the show and she confirmed that not only was this their first live performance but that she and the band had only two rehearsals before the show!  You would have never guessed that though as Dawn and Al, along with their three-piece backing band, played an evocative, atmospheric set where the music, vocals and image all meshed together perfectly.

Here are videos of “Tarot I” and “Amarillo” from this performance – the latter with Shelbi Bennett of The Midnight Pine.

Next up was Dani Bell & the Tarantist – this time featuring Al Howard on his usual percussion set-up and Dani Bell from Boychick playing, singing and dancing to a backing track.  Oh, and of course they’re both wearing masks!  Now, I’m not usually a fan of using prerecorded music in a live setting, but Dani and her Tarantist make it work completely and I was drawn in from the first notes.  There is a sultry yet sinister texture that pervades many of their 60’s girl-group influenced songs and Dani, who I recently saw kill it during the Bowie Undercover show at the Office, is the perfect singer to covey this vibe.

Near the end their set the Redwoods musicians came out along with Birdy Bardot and Shelbi Bennett to play “Crave”. Check it out here.

The middle act was Birdy Bardot with the band’s namesake on vocals, Matthew Molarius on guitar, Jake Najor on drums, Josh Rice on keys, Jason Littlefield on bass and, drum roll please – Al Howard on his saw/chain/tambourine contraption!  I’ve seen this band three times recently and each performance is a revelation.  The combination of Birdy Bardot’s voice and stage presence, the musicianship of the band, and the songs themselves are a delight in any setting but here on the main stage of The Music Box it all came together and showed what this Revue is all about: giving these acts a chance to perform in front of a big crowd at a venue that usually fields national touring acts. 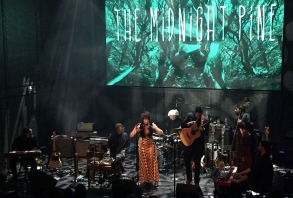 The penultimate act this evening was The Midnight Pine, featuring Shelbi Bennett on vocals and the rest of the Redwood players backing her up.   I met Al and learned about The Midnight Pine all in one fell swoop a couple of years ago.  My usual local record stores are Lou’s and Spin but whenever I find myself down near OB I always try to stop in at the Cow. Al was behind the counter and was very helpful as I looked for some deep catalog Smash Mouth and 3 Doors Down on vinyl.  They were all out but somehow the conversation wound it’s way around to local music and he admitted to being a musician and with a little cajoling I got him to sell me a couple of Midnight Pine CD’s.

This Revue then was the first time I was finally able to see the group live and I was happy to find that they are every bit as good as I expected them to be.  The band is equal parts subtle and powerful while Ms. Bennett is just a force of nature. Take a listen to the clip below of their new song, “Grace”, as she tells the song’s story first with a hushed melody and then just belts out the chorus in a clear, country tinged voice that fills the entire room.

Here’s “Broken Wing” and a new song “Grace” from the Music Box. 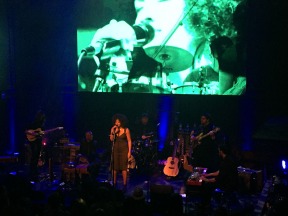 Last up in this San Diego showcase was Rebecca Jade and the Cold Fact which features the band’s namesake, a local neo-soul singer, out in front of the Redwoods band. The two parts complimented each other perfectly to create a hybrid of soul, R&B, funk and lounge that got the crowd up and dancing in front of the stage.  Both live and on their self-titled LP, RJFC’s sound compares favorably to trip-hop bands like Massive Attack and Thievery Corporation where instrumentation, vocal styles and genres are all melded together to take a song wherever it needs to go.

Congratulations to everyone at Redwoods Music, and especially to Al Howard, for putting on such a fantastic show. I’m certain that Al had a lot of help putting this all together but he is the common denominator that runs through it all, plus he played in all five bands that night!  Musically, he often seems to be handling three rhythms at once and is channeling the music, feeling and emotion of every song.  Together with his partners he put on a great show to an enthusiastic crowd, giving his friends a chance to shine and San Diego music fans an opportunity to see just what kind of talent is playing all the time in our city.