I made it through the first 55 years of my life without ever seeing The Schizophonics and now I’ve seen them four times this year already. I was doing it wrong!  The first time I saw The Schizophonics I had no idea what to expect.  It was a crowded night at The Casbah and I was near the back craning my neck looking for the second guitarist. I turned around to say something to my friend and he was doing the same damn thing! END_OF_DOCUMENT_TOKEN_TO_BE_REPLACED

La Luz – Weirdo Shrine.  La Luz (Spanish for “the light”), are an all-female quartet based out of Seattle, WA.  After forming in 2012 they quickly released their debut, It’s Alive, in 2013.  Over the course of two albums now, the band, led by singer/guitarist Shana Cleveland has created a sound that deftly mixes girl-group sounds, indie rock, doo wop and of course the predominant element of their sound: surf rock.  This is indie music for surfers that don’t care about indie rock; just as it is surf-rock for indie scenesters that don’t care about surf music.  This turns out to not be a problem for me at all since I love both Surf and Indie rock.  The music goes from languid to upbeat between and within many of the songs, but always there are reverb drenched guitars and girl-group vocals.  If you’re feeling a little down in the dumps one day – grab a cup of coffee, or maybe a beer, and pop this record on.  Problem solved!

If anyone needed a reminder of how fun rock ‘n’ roll can still be, they should have been to this show at The Casbah in San Diego. The Casbah was celebrating its 25th anniversary and was hosting bands from throughout its storied history, along with the kind of acts that should keep the venue vital for another quarter of a century. 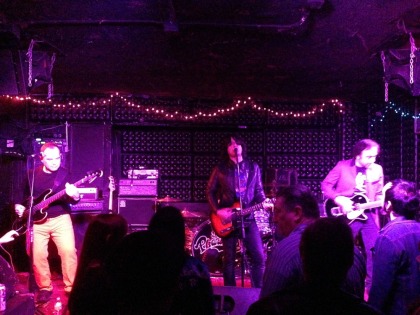 First up on an all San Diego bill were newcomers, The Phantoms. This group features Victor Penalosa, the current drummer for the Flamin’ Groovies, on guitar and vocals, and a fantastic backing band of Xavier Anaya on lead guitar, Chris Iandolo on bass and Jarrod Lucas (from The Dragons) on drums. They opened with the lead song from their self-titled debut album, “Baby Loves Her Rock and Roll”, which sounded like a revved up long-lost song by The Beat (Paul Collins’ not English). The Phantoms then charged through their 10 song set as if they were the headliners with songs like “Stab My Broken Heart”, which besides kicking ass throughout, ended with the opening riff to “Love Gun” by KISS. The set then ended with a garage rockin’ version of Bob Seger’s “Rosalie” and then an homage to the bassist for glam-rock heroes Mott The Hoople with “The Ballad of Overend Watts”.  These guys seem to be channeling the late 70’s/early 80’s power pop of The Plimsouls, 20/20 and the aforementioned Beat and are definitely a band keep an eye on.

END_OF_DOCUMENT_TOKEN_TO_BE_REPLACED

There seems to be no end to the supply of two piece guitar/drum duos in rock n’ roll these days.  Here is Gloomsday, the self-described “doom pop” band from San Diego, rockin’ out on a track from their Sunburn Sessions EP, released in  2015.  Gloomsday is easily one of my favorite San Diego bands – more on them soon… 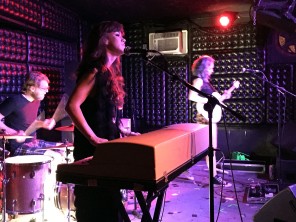 Clearing out my old tumblr blog (originally from Jan 4, 2016)

One of my favorite bands in San Diego for a couple years now has been Soft Lions.  I was fortunate to see them in their debut show at the Soda Bar at the end of 2013; I saw them again the next year opening for Small Black and Snowmine, and then again this past summer at a headlining record-release show at the Casbah.

END_OF_DOCUMENT_TOKEN_TO_BE_REPLACED

This past Monday at the Casbah proved once again why it’s a good plan to arrive early for shows and catch the opening acts.  Your worst case scenario is that you get to hang out, have a couple of beers and socialize, but more often than not, if you give these support groups a chance, you should find something to enjoy about them.  PINS, who, like headliners The Subways, hail from England,  provided strong evidence to support my theory.  The way I see it, if you can’t enjoy an act as good as PINS you probably don’t really like rock ‘n’ roll that much!

PINS may be from Manchester, but if they want to move to San Diego they would fit right into our local music scene.  Their mix of noisy but melodic guitar-led music, with influences as wide as shoegaze, surf, riot grrrl and lots of garage-rock would feel right at home here.  The band, featuring Faith Holgate on lead vocals and guitar, Lois McDonald on lead guitar, Anna Donigan on bass, Sophie Galpin on drums, and Kyoko Swan on keys,  were quite dynamic and could go from a soft melodic passage to a ferocious wall of sound.  Some of the best moments came when all the PINS would sing together – sometimes in unison with gang vocals and at others with layered harmonies.

PINS were also adept at getting the crowd involved in the show.  The Casbah was filling up nicely for their set, but San Diego audiences often take a wait-and-see approach before giving it up for bands they don’t know.  Holgate decided to just take things into her own hands, though, and went out into the crowd – as she was singing – and took the hand of a girl near the front and started dancing with her. This, of course, got everyone moving, and by the end of the set the crowd was completely engaged. If someone had walked in right then, they might have thought PINS were the headliners!

I had a chance to speak with Holgate after the show and she told me that they had just played the Casbah recently and that this show went a lot better for them.  I took that to mean that the crowd was larger and more active during their set.  My prediction is that by the next time they come through town they’ll be able to count on San Diego from the start! 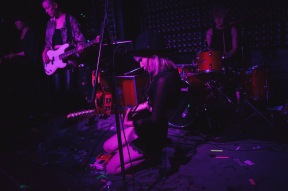 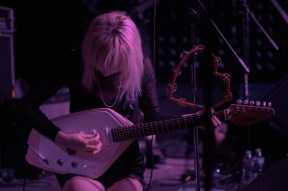 Here are a couple of videos I took from the show:

Both songs are off PINS’ 2013 debut album, Girls Like Us.  I haven’t heard that record yet but I did pick up their second LP, 2015’s Wild Nights, at the show  and can confirm this record is going to get a lot of play!  Apparently they recorded it at the famous Rancho de la Luna studio in Joshua Tree (that’s the location in the Palm Desert that Dave Grohl featured in his Sonic Highways series) and their producer, Dave Catchling, managed to keep PINS’ distinctive character while also helping them achieve a bigger and more varied sound.

You can check out more about PINS here on their website:  wearepins

All photographs are by Esau Laniado at www.instagram.com/esaulaniado.

OK, so I think I’ve got this figured out now.  Jon Bonser, the drummer for The New Kinetics and Soft Lions (on the right), wanted to play guitar.  And Brian Reilly from the New Kinetics (center) felt left out with only one band. So in order to resolve these issues they obviously needed to form a new band – and call it the Hiroshima Mockingbirds.  Makes sense to me.

This was the third time I’ve seen a debut show in the past month (including Creepseed and Cardinal Moon) and like the other two, if they hadn’t told us it was their first set we never would have guessed.  Everything about the HM’s made it seem like they’ve been around for awhile and will be around for some time.  They fit perfectly into the indie/garage scene that is revitalizing rock n’ roll on a local and national level.

For at least twenty years now I’ve heard and read that rock is dead or dying (fuck you Gene Simmons) but when I see a set by a new band like the Hiroshima Mockingbirds I know that I’ve got nothing at all to worry about.

Here’s a video of “Jonny’s Trees”: Hiroshima Mockingbirds at the Til-Two Club 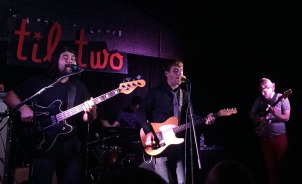 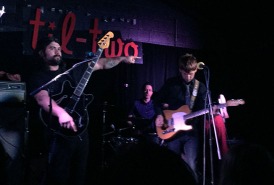